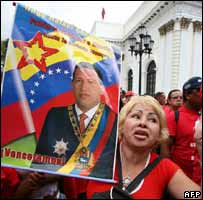 Since reading the Harry’s Place entry making a dig at Hugo Chavez’ record on trade union rights, I’ve now had a chance to look over the International Trade Union Federation report on Venezuela.

I have never subscribed to an entirely uncritical view of Chavez and it appears that those things for which people supported him may be diminishing.

In any case, let’s examine some of the things drawn to our attention by the report.

Straight off the mark, there are worrying trends of centralization into the hands of the state of certain details such as lists of every member of every trade union. Given that trade union leaders now face arrest by the government should they lead a protest which is not government sanctioned, this is indeed a worrying development.

It is also true that the CNE (National Electoral Council) continues to hold control over elections to trade union positions.

The workers and union leaders arrested usually find themselves released under pressure from their comrades’ strikes. The use of the machinery of the state in this fashion is disturbing from a leader who changed the constitution to radically alter the state, so that it would be more responsive to change and more accountable to the people.

Yet, other matters cited as abridgments of trade union rights such as the Bolivarian constitutional requirement to hold all-member, secret ballot elections of leadership in trade unions are surely beneficial? In a country where large swathes of the population were once forced into ‘bosses’ unions which weren’t really interested in collective bargaining, surely the compulsion to open elections is a good thing?

It’s also important to note that this measure, including the CNE monitoring of trade union elections, was placed on a referendum during the December 2000 and November 2001 local elections and passed by a fair margin of votes.

The one thing we can be sure of in Venezuela is that even in the trades unions of Venezuela, a battle is being fought between pro-Chavez and anti-Chavez elements. I’ve heard bad stories about the CTV, the former largest federation of trade unions – and the workers of Venezuela seem to bear out the bad reports since they disaffiliated in droves and joined a pro-Chavez federation called the UNT. This actually made the UNT the largest trade union federation in Venezuela.

Which way one swings is ultimately determined by how one judges Chavez, the man, and the movement which begat him.

The workers’ co-management initiatives, the unprecedented level of political activism amongst the poorest people you can imagine, the counter-coup which restored Chavez to power, American involvement. The waters of Venezuela are murky currently and if there is one piece of advice which Chavez should heed, I think it is to keep his own nose clean in respect of interfering with working class activism.

The “Bolivarian revolution” is not currently under huge threat. Despite the four general strikes of the CTV, despite the death squads hired from Colombia, despite rumoured involvement of the CIA in the coup which ousted him, Chavez was re-elected last year and continues to be popular. Yet this is not socialism; as has been elsewhere reported, all Chavez has done is superficially redistribute wealth without actually involving the poorest in the economic system.

Ultimately I feel that, unless Chavez is pushed still further towards the left, whether by yet another attempt at a coup or by the demands of his own supporters, the “Bolivarian revolution” will peter out. This will leave the way open for Chavez’ removal and the disillusionment of his own supporters. Chavez the working class hero could become Chavez the neo-Stalinist dictator. 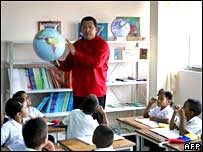 The encouraging thought is that the working classes of Venezuela might not let Chavez get that far. The tensions that disrupted last year’s UNT national conference were to do with the desire for immediate elections, to be rid of government-appointed coordinators. It seems the left are not content to be led from the front by a lumbering elephant – ever true to form.[2]

In sum total, I wait avidly for more news from Venezuela.